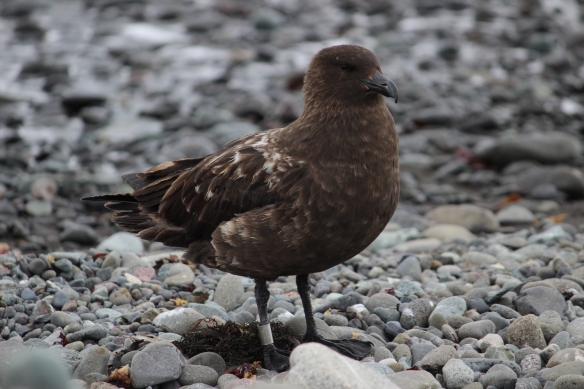 Skua taxonomy is a wee bit confusing, but I think this is a Stercorarius antarcticus which I saw on King George Island on my trip to Antarctica a few years ago.

I saw this Larus dominicanus on my trip to Antarctica. The species is threatened by marine oil spills and suffers mortality from interactions with trawler warp cables (http://www.iucnredlist.org/details/22694329/0).

If you’d like to see many more of Pygoscelis antarctica, but can’t go to Antarctica in person, you can participate in the Penguinwatch project. It’s great fun!

Welcome inside the caldera of an active volcano! Visiting Deception Island (wikipedia article http://en.wikipedia.org/wiki/Deception_Island) had been top of my wishlist, and there I found myself wrapped into all my layers and an additional overall on a geological cruise on a polarcircle boat. Expertly guided by Steffen from the Expedition team, we drove through wind and snow to see what there was to be seen. The mountains looked as if they had been part of a watercolour painting. 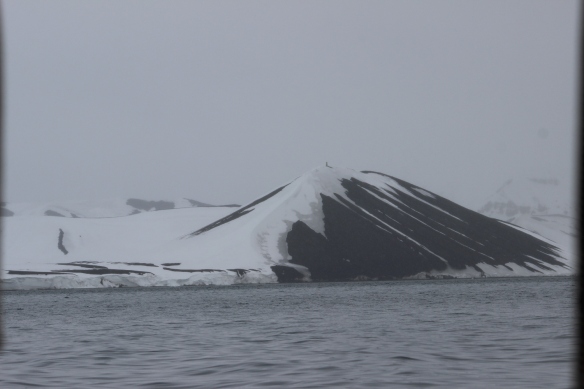 Deception Island has the shape of a doughnut with a small opening on one side, called Neptune’s Bellows. This is where ships get into what is seen as safest harbour in Antarctica. Apart from the fact, that the volcano underneath is due to erupt soon. The seabed inside the caldera is apparently rising, the water tourists used to take a dip in too scolding hot. And we found some fumaroles, guarded by a lone Gentoo penguin.

In some places, hyaloclastite has formed.

The whole island is under close scrutiny by geologists, living in a couple of bases scattered along Whaler’s Bay.

During our tour, fog and snow got heavier, my feet got colder (in spite of my wearing the fabulous rubberboots) and by the time we reached the youngest craters on the rim and could have admired some fine layers of ash from different recent and older eruptions, all I wanted was a cup of hot chocolate and warm feet. The couple opposite me looked exactly how I felt. Then from somewhere a kind of snowball was blown against my nose. They confirmed, yes this has just happened. I love geology, and Steffen did a marvellous job, but icy cold feet, and the muscle pain from the kayaking … I felt more like crying at that point.

This was perfect timing for three Humpback whales to come out of the water right in front of us.

They were headed for Neptune’s Bellows. I was so grateful, because the narrowness of the exit meant we would leave them to it and not go out there too, as originally planned. Before the whales followed this plan, however, they decided to come a bit closer, say hello to the ship, and then swim out into the open ocean again. 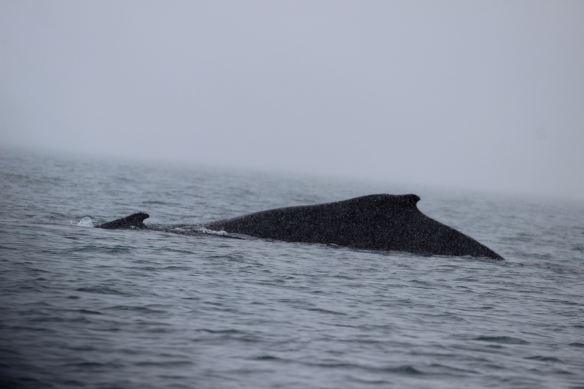 Who cares about cold feet when you can have an active volcano and Humpbacks together?!

The weather was fantastic, the water clear and absolutely calm, so I went kayaking! I didn’t take a camera, but there are going to be photos on the husband’s blog: http://chinese-poems.com/blog/. It was just marvellous to spend more than two hours so close to bits of ice (smallish and biggish) in the water, with Chinstraps and Gentoos porpoising by. Because I’m a lazy sod who doesn’t exercise, I also had the muscle pain of my life and could not lift the glass with orange juice for breakfast the next morning.

The Chinstrap colony on Half Moon Island is like so many others part of www.penguinwatch.org and http://www.penguinlifelines.org/. I was a bit sad that I didn’t see it, but after the kayaking I was exhausted, even missed going swimming in the dry suit. Yet, it was breathtaking and something I would really like to do again some day.

First of all, here is an overview of our landing sites on the South Shetland Islands. The first stop was at King George Island, where there are a number of research stations. We visited this one: 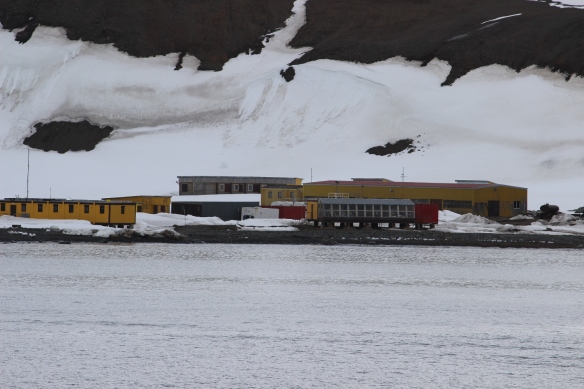 Its official name is

For everyone who does not speak Polish, it is Arctowski Station, named after a Polish geologist. People there must think a lot about home. 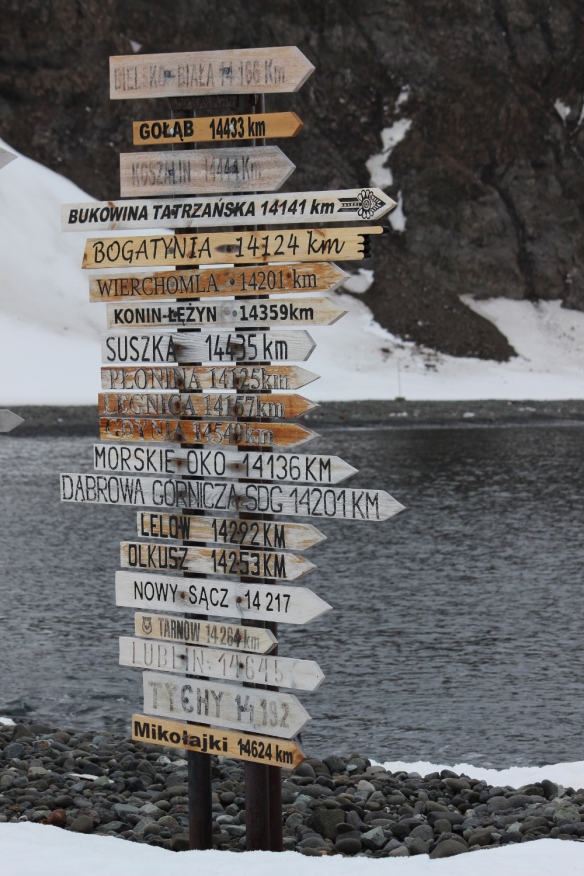 If one follows some simple rules, even the ordinary tourist is welcome.

I found the station very exciting, but had forgotten to cover my camera lens – condensation – no pictures. Sorry. Their penguin origami and DVD-collection were both impressive, but best of all was how warmly the researchers welcomed us!

Outside, I experienced a few ‘firsts’. My first Weddell Seal.

My first Adelie penguin. The rookery there is also study ground, so we had to stay a bit away. Which is fine, Adelie penguins are in decline on the Antarctic Peninsula, so as little disturbance as possible is very good as far as I’m concerned!

I also saw my first Chinstrap penguins. Both species feature often on www.penguinwatch.org, but I don’t know if this particular project on King George Island is part of the Zooniverse one.

The Chinstraps here were looking for pebbles for their nests.

The last of my firsts was, well, a reminder that the station is manned by humans. 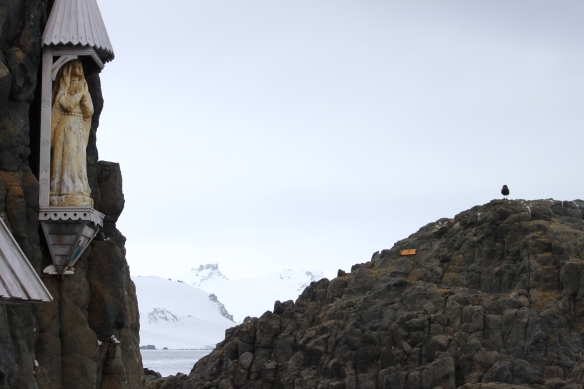 We had fair weather on our way from South Georgia. The sea was calm enough to spend some minutes on deck when a pod of Fin Whales was spotted. 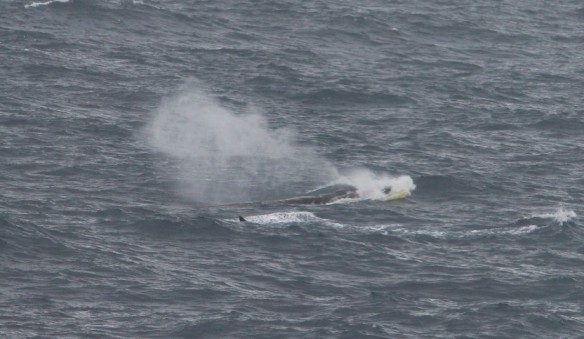 Being a landlubber, I went into the cabin again fairly quickly.

The next time I ventured out was to admire this tabular iceberg. We had reached the outer regions of the South Shetland Islands! It had not been possible to go to the South Orkney Islands because of ice conditions. I was fascinated by the fact that we learned this from data from the Sentinel-1 satellite, which I had heard about here: http://raumzeit-podcast.de.

Elephant Island arose mighty out of the sea, slightly covered by clouds. I fancy the lenticular ones, and I’ve never seen so many before.

The island’s significance is best explained in the words we found on our daily information sheet on Fram:

A name steeped in legend, Elephant Island is an icon for “Antarctics” the way Cape Horn is for mariners. This imposing and desolate island was home to 22 marooned members of Sir Ernest Shackleton’s fabled 1914 Imperial Trans-Antarctic Expedition for four and a half months while they awaited rescue. Led by one of Antarctica’s greatest unsung heroes John Robert Francis (known as Frank) Wild, the men barely survived living in horrible conditions beneath two overturned lifeboats. Named for Frank, Point Wild was originally known as Cape Wild and “Cape Bloody Wild” by the men stranded there. –
It is the triangular rock in the middle and the small strip of land to its left.

Point Wild is home to a small colony of hardy chinstrap penguins and a single bronze bust incongruously watching over them. The bust is of Captain Luis Pardo master of the Chilean Navy ship Yelcho that eventually rescued Shackleton’s men. Pardo’s was no mean feat; taking the underpowered Yelcho without permission he risked his command, his rank, and his very life on a mission where three other superior craft had failed.

We did not land, but sailed by slowly. The ever-changing antarctic weather meant there were some beautiful displays of light when we reached Cape Lookout, the southern tip of the island. Welcome to Antarctica! 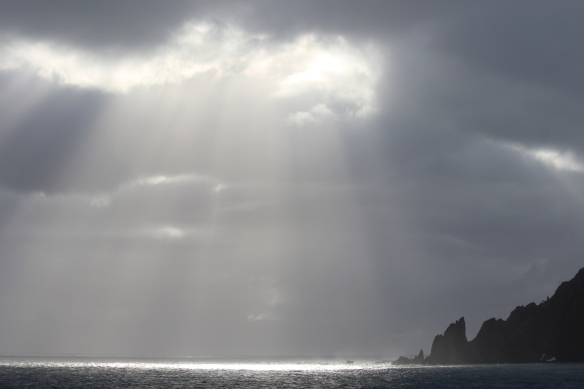