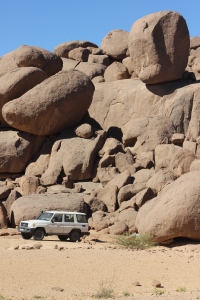 On our second day in Tamanrasset, our fab guide (and the three vehicles of the gendarmerie) took us north-east of the town, passing through fields of plastic rubbish into an area that is best described as boulder country. I don’t know the geological processes which shaped the rock formations to make them look like they do, but it was an awesome place to see.

At some point, our driver stopped near some boulders and we were told to venture in between them and eventually under one of the big stones. There, on the ‘ceiling’ above us, we saw some rock art which is a few thousand years old. I was very tempted to touch it but managed just about to behave myself. I couldn’t resist though feeling in the hole where the old ones must have mixed the paint.

While our guide prepared picnic and tea, we had a look around and admired the landscape and whatever wildlife we could find in it. I was amazed at a fairly vibrant insect life.

Back in the hotel in the afternoon, we spent some time in its garden where we saw more birds. An Egyptian vulture flew by and several silverbills and firefinches had made their home in the garden’s trees and were just lovely to observe. At this point, some thank yous – to the birders on birdforum.net for their help with bird IDs and to our colleague Narimene for making endless phonecalls!