A couple of weeks ago I wrote about my first trip to Tlemcen. Of course, my friends and I not only spent time in town, but explored some of its surroundings. So here’s a map to put things into context. We went along road N7 up to Ain Fezza and back and to the lake south of the city. The National Park in the southwest is at the top of my wish list.

Scenic stop number one was at the apex of the hairpin on road N7. There’s a spring which is considered powerful for healing body and spirit. The place is nestled in what in ancient times seems to have been a waterfall. The cliffs are towering over a tiny hamlet which only seems to exist to regulate access to said spring. The exciting bit of architecture is formed by an enormous bridge constructed by Gustave Eiffel.

From there, we headed towards Ain Fezza, and then pretty much up the mountains whose cliffs we had just admired. It was freezing cold, but oh joy, there were raptors circling high up in the air! 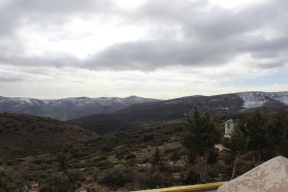 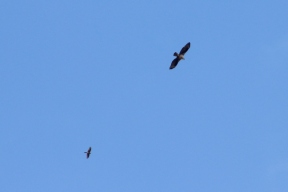 So, after a picnic with sparrowhawk, Bonelli’s eagle and some local cats we descended down into the caves of Beni Aad. The whole cave system reaches as far as Morocco, but the part accessible for visitors is small. Nevertheless, you can walk around just on your own, take photos, shake your head about the morons who try to leave their signature in the dripstone, and best of all, spot the bats.

Ascending from the fairly warm caves, we ventured into town, did some sightseeing there and then went up the southern hills again to the view-point of Lalla Setti. The views towards north and in the direction of the Med were impressive. Apparently, on a clear day it’s possible to see Spain.

Our last port of call was the reservoir just south of Tlemcen. We stopped at some farmer’s stall to get some free-range eggs, butter and other locally produced food. Yummy! The lake itself was wonderfully quiet and home to some gulls and waders. The perfect place to finish off our tour. 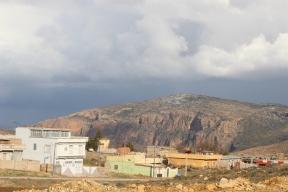 This Thalasseus sandvicensis flew by a beach near Oran, Algeria. Many thanks to the good people of birdforum.net who always help with my queries!

I saw this Psilopogon lineatus a few years ago in Thailand. I like the contrasting colours.

Recently, we had friends over from Germany and we decided to spend a day in Tlemcen, a city close to the Moroccan border. It’s steeped in history and there’s plenty to do and see. One day is not enough to explore everything, but we got a really good impression – also thanks to a colleague who acted as our local guide.

One thing that immediately caught the eye is the countless minarets, all square brick towers. I still need to find out about the architectural background because I used to think of a minaret as a round and much higher structure. 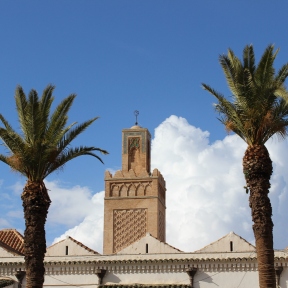 An amazing surprise was the number of minarets with stork-nests on top, a lot of them occupied or under territorial disputes. It was amazing to see so many White Storks so unexpectedly. 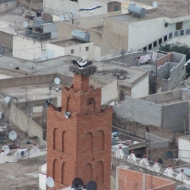 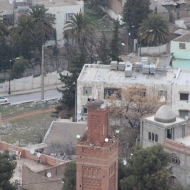 One of the many places of interest in Tlemcen is the Mosque Sidi Boumediene and the adjacent ruin of the palace of the Zayyanid sultan. There are some beautiful remnants of calligraphy in the palace and one can enjoy a view of the city. 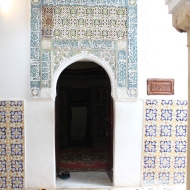 We also ventured into the surrounding areas, but that’s for another post. 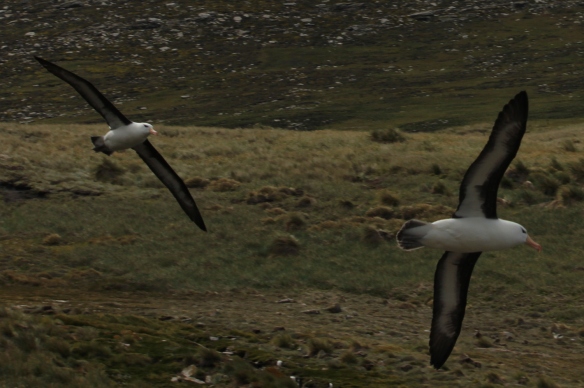 Thalassarche melanophris lives circumpolar in the southern oceans. I saw these two and their colony on West Point Island in the Falklands.

The numbers of the black-browed mollymawk are decreasing, and the species is labelled Nearly Threatened. Longline fishing kills the birds as does trawl fishing, and of course plastic intake kills too.

On a recent walk through farmland near Oran, we came across this Lanius excubitor (probably ssp. algeriensis). Shrike taxonomy is a minefield.

The birds have a varied diet but eat mostly large beetles – which are in decline because of pesticides and habitat loss. Hence the birds suffer.