These two Urolestes melanoleucus are also called African long-tailed shrike. I saw them in Kruger National Park, and the tails still amaze me.

Over the last few days, I’ve visited a lot of islands in the Caribbean and the South Atlantic via WorldBookProject. In the mornings, I would walk into the city centre, then sit there for a few hours in the library, and then walk back home in the afternoon. The walk is about 5 miles return (or ca 8km in civilised units), so it’s perfect to clear your head before and after such an intense reading session.

At first, I was a bit flummoxed by the title, but during reading this delightful little book its meaning became clear. Originally, there was a thing called a Journey cake which was very rich to keep one going while travelling. The name became corrupted, but the cake is still made in many varieties, and the recipes in the book sound yummy. Now, the cake in the book seems to me a wonderful allegory for how the culture of the islands has changed, and how people are trying to adapt to new things, like a huge influx of tourism, and the effects that has on their traditional lifestyle.

110 Cayman Islands: Michael Craton and the New History Committee – Founded upon the Seas: A History of the Cayman Islands and their People

When I started looking for a book for the Cayman Islands, my main fear had been that I’d have to read about tax evasion or something equally boring and unpleasant. Luckily, that was not to be. This history gave a comprehensive and readable overview of the last 500 years on the three islands with a focus on social issues like slavery and the economy. I was surprised to learn that things really only took off after the 1960s. Another thing which I found surprising and actually quite appalling was the tiny part that environmental issues seem to play: 2 paragraphs in 500 pages. If this reflects what it’s like on those islands, I’d rather spend my holidays somewhere else – where people care about their wetlands, sharks and forests.

Having been to the Falklands before (https://spockisworld.wordpress.com/category/countries-places-ive-been-to/falkland-islands/), I was looking for a book that was not just about the war. And this one delivered. I learned about different kind of fighter planes, the complications of refuelling mid-air, the way personnel have to assure safety when it comes to wildlife,  the issues around supply chains in remote outposts, and that I’m hundreds of hours away from earning a ‘1000 hour Life of Brian badge’.  I’m still scared of flying, but if one is interested in aviation and British aviation history, this book is a goldmine.

And something that stood out for me was that if you buy a copy of this book, part of the money goes to the charity http://houndsforheroes.com/. From their website: Hounds for Heroes provide specially trained assistance dogs to injured and disabled men and women of both the UK Armed Forces and Emergency Services.

If you want to read a book from every country and dependent territory, you not only need a lot of stamina, but also resources to get the books. So far, I had already had dozens of countries on my own shelf or got them from my husband. I also got some books as presents. On top of that, colleagues lent my some of theirs, and there was a small library in a former work place. But quite a number of books I bought myself. I have a subscription for a monthly audiobook, and luckily, there are many second-hand bookshops on the internet. All in all, it is still not cheap, and for some places there just doesn’t seem to be any kind of book available. So, I’m very happy that for the time being I got a reader’s card of one of the most amazing libraries ever. What’s more, this also allows access to some rather rare books, as you can see below. All hail Bodleian Libraries! 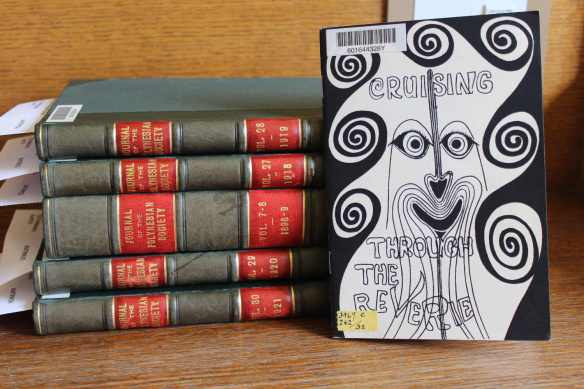 Reading this story by one of the last High Priests of the islands was truly captivating. It was a mix of genealogy, myths, recipes, poem, song, description of rites and much more. Several people had translated what had been an oral account dictated over a period of time and published it in short instalments in the Journal of the Polynesian Society, where it appeared alongside the original version. The first bit was published in 1898, so just touching and smelling this book was so rewarding. There is apparently a new edition of this History available, but I loved reading it with all the translators’ remarks like [I have no idea what that means].

As far as I could find out, this book is out of print and only available second-hand at a hefty sum. That means, it is another reason to be eternally grateful for the existence of libraries. The poem is also called Cruising Through the Riverie; in fact, I found both versions in the book I read. It was a kind of dialogue between Ambition and Expectation, and also quite political – several world leaders of the day like Nyerere, Nixon or Sukarno were mentioned. I found it a rather refreshing read. 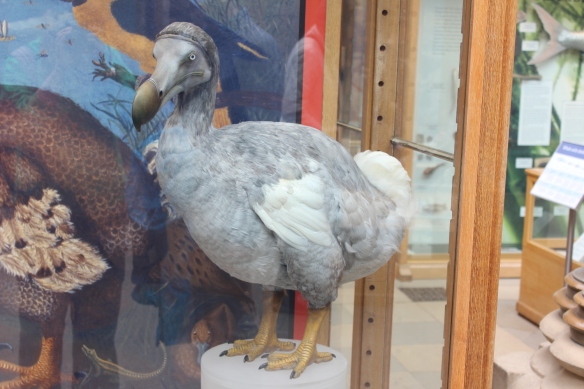 April 22 is Earth Day. Raphus cucullatus as exhibited in Oxford’s Museum of Natural History is the unfortunate symbol of where we’re heading. The Age of Loneliness, or Eremozoic Era according to E.O. Wilson, is upon us. So I think his idea to set aside at least 50% of the Earth for non-human use only is a very good idea.

After a short reading break during March, I’m continuing with WorldBookProject. It isn’t always easy, but most often very enjoyable to dive into a book = a new reality = a different way of seeing the world. This was definitely the case for the three books mentioned in this post.

104 Burkina Faso: Malidoma Patrice Somé – Of Water and Spirit: Ritual Magic and Initiation in the Life of an African Shaman

I was fascinated by the author’s autobiographical account of his initiation. It was very short, yet at the same time really intense (maybe also because he narrated the audiobook himself). His points about linguistic colonialism were of particular interest to me. I think what I liked most is his ambition to reconcile the ways of perceiving reality in different cultures.

105 Puerto Rico: Rosario Ferré – The House on the Lagoon: A Novel

This audiobook was well narrated by Silvia Sierra. It followed the story of a Puerto Rican family through the 20th century. It took me a while to get to grips with the enormous number of characters, but eventually I just went with the flow and enjoyed their experiences. It was equally exciting to learn about the local history, especially attempts to  gain either independence from the USA or statehood.

I haven’t read much of the Pacific yet, but what always seems to come up are these themes: abusive families, hypocritical clergy, and corruption (usually in connection with aid programmes). In this collection of short stories, all of this and more was beautifully wrapped in the cloak of jokes and satire. So, despite some sad and bleak events, I found myself laughing. I think this is a hallmark of good literature: it puts difficult occurrences into comprehensible and digestible language, so we can deal with the dark stuff on an emotional and a rational level.

For the time being, we’re in Britain, and last week we had a lovely day out in Oxford. Of course, the colleges in all their non-Cantabrian modesty () are always worth a visit, and this time we went to see Balliol (having been into Pembroke, Magdalen, and St Edmund’s before). 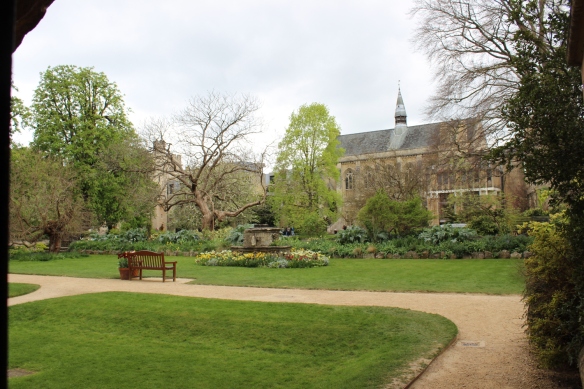 Pretty much all colleges sport some pretty or not so pretty gargoyles, and Balliol is no exception. They also seem to like rather long lunch breaks. 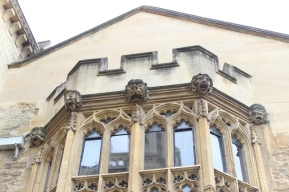 From the posh, we went to the more down-to-earth, but not less educational Pitt Rivers Museum. It must be one of the most crammed exhibitions, and I really like it. If you are in Oxford, don’t miss out on this one!

The English weather was merciful, so we could also stroll around Christchurch Meadow and along the river Isis (usually known as Thames). The cows were impressive, and to our surprise and delight we also saw the first hatchlings of the year. 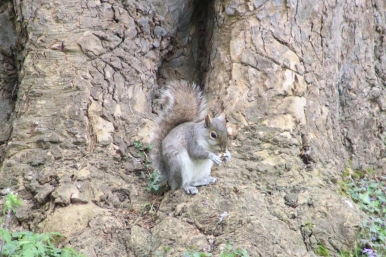 This lovely Mimus saturninus was very vocal in Buenos Aires’s Costanera Sur Ecological Reserve. It’s great place to walk and go birding, and it was a marvellous start to our trip to Antarctica, almost three years ago.

The arrival of Phylloscopus collybita is always a sure sign that spring is in the air, even if the weather in Germany has been chilly for the last few days. I have to thank The Unknown Birder on the birdforum.net for helping me with the identification. Little brown birds are lovely, but not easy for a beginner-birder like me. On the bright side, I can ID this bird by its song.

Having left Slovakia, we spent a few days in Thuringia to visit family. Someone had the good idea of going on a day trip, and because neither of us had been to Colditz before, we decided to go there. They have a website (http://www.schloss-colditz.com/index.html), but no information how exactly to get there. So, while we were driving into what we thought as the right direction, a public bus headed towards us, labelled ‘666 Colditz’. Uh-oh.

Well, we eventually arrived. There was a diversion, and signposting towards Colditz town or Colditz castle was much sparser than I had anticipated, given how important the place is, especially for British tourists. For the uninitiated: Colditz was an Oflag during World War II, and most of the PoWs were British. Having said that, there were also substantial numbers of Polish, French and Belgian prisoners.

This is what the castle looks like these days:

One can go on guided tours, where there’s a lot to be discovered, but we only went to the permanent museum and the special exhibition. The latter was about the role of Poland during WWII, in particular Polish resistance and prisoners at Colditz.

Have a look at this poem: 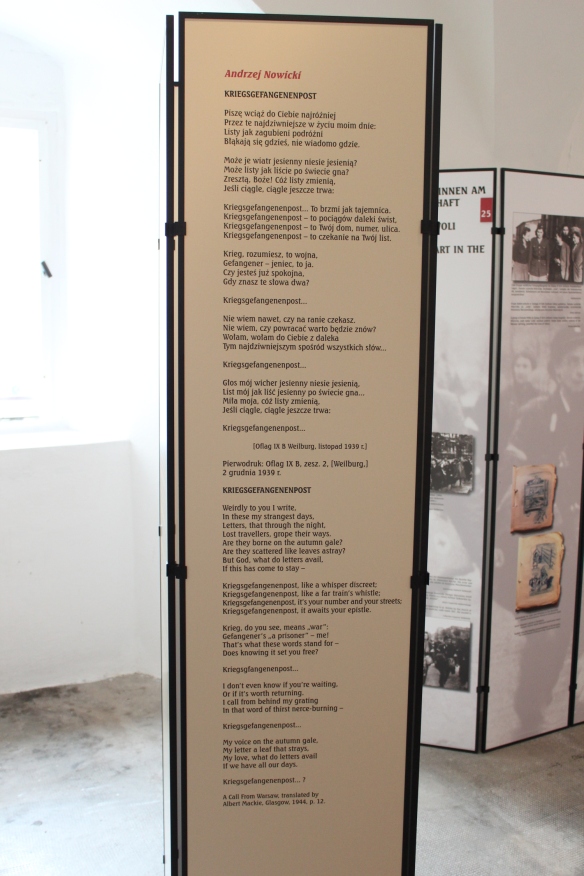 ‘Kriegsgefangenenpost’ means ‘post for prisoners of war’. We saw more of that in the permanent exhibition.

The major part of this bit of the museum was about all the ways of escaping from Colditz. If you’ve ever watched a film called ‘The Great Escape’ – that did not happen at Colditz, but lots of similar stories did. I was amazed to learn that people escaped from this prison in the middle of Germany and made it through enemy country all the way to Britain or Allied territory! And Colditz today looks probably nicer than in the 1940s …

Of course, there was also some birding to be had, both inside and outside the castle.

All in all, if you’re in Saxony or Thuringia, and don’t know what to do, Colditz castle is certainly worth a couple of hours. There’s plenty of information available in English. And if you don’t have your own transport, you might actually get a chance to go by bus 666. Reward yourself afterwards with a home-brewed glass of beer in the pub Waldhof (on the western main road towards the town of Bad Lausick, closed Mondays and Tuesdays). Prost. 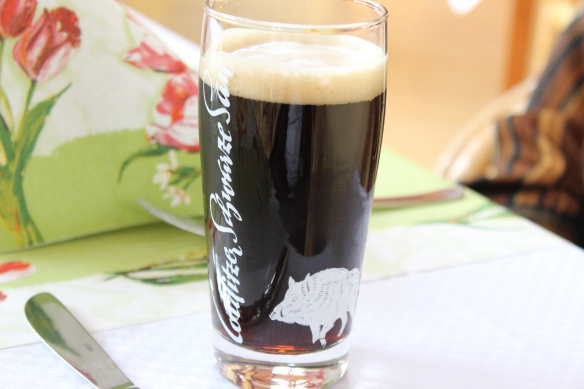