Last December, we went to Venice for a handful of days. Being a language teacher, I suffer from that Berufskrankheit to look for odd bits and bobs of language, and I certainly found them.

For instance, weird places to live in: 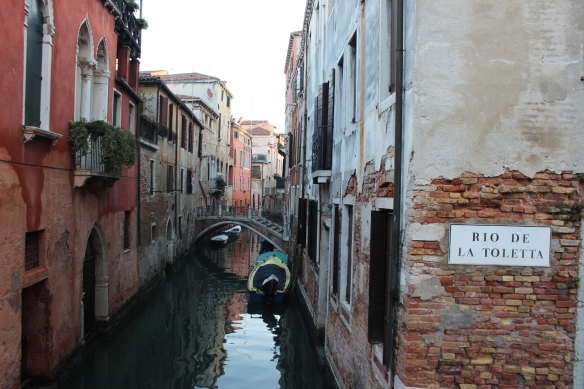 Ok, I admit, my ignorance of Italian is probably the biggest issue here.

But there were also some surprises when it came to the inhabitants of such places.

A family of Jedi, fine. A family of galaxies? Or robots? Or …? Hm. Anyway, they have their day-to-day struggles to deal with and to make them visible to the many tourists. 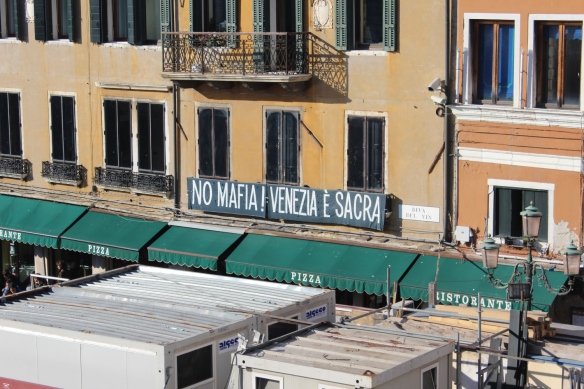 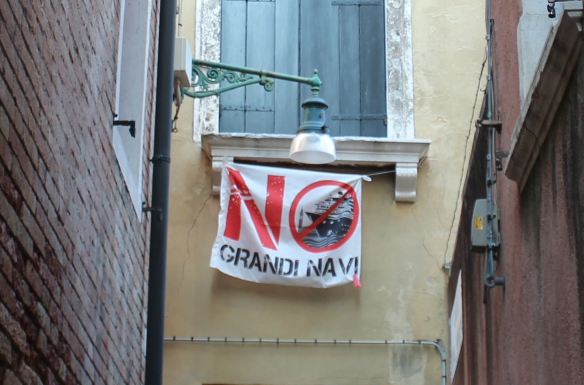 I hope their protests are successful. And I also hope, that all those numpties with their selfie-sticks will find their [heavily censored].

On a slightly more mundane note, there are also the usual lost-in-translation signs. This is something I’m not keen on trying: 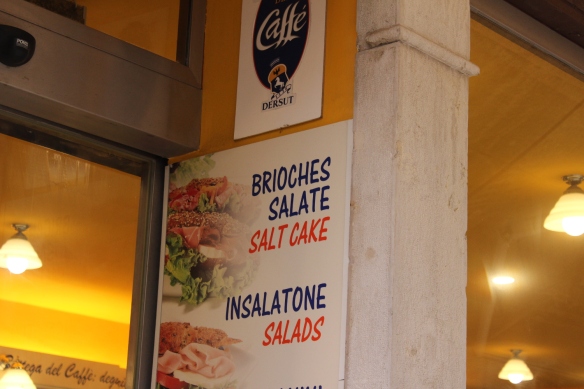 And those two inside a museum and quite far away from any bathroom left me completely baffled. Please leave a comment if you can figure out what the unsuspecting visitor is supposed to be doing. 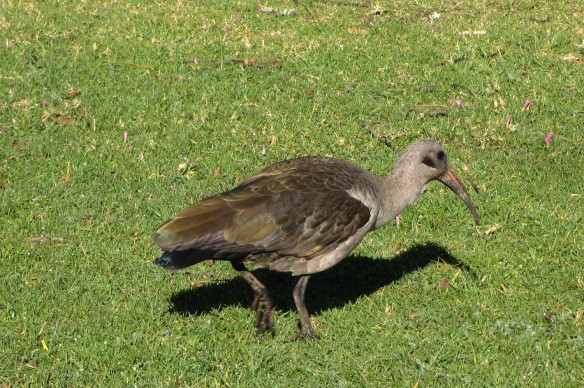 Bostrychia hagedash is sometimes also called Hadada Ibis. It has a very distinct haaa-call – hence the name. This one was strolling on a lawn in the Helderberg Reserve near Cape Town.

In my quest (and at times it really feels like one), I’ve reached a first big milestone. So far, I’ve read books from 100 countries or territories. 43 were written by female authors, 5 had mixed authors, and 52 were written by men.

I’ve also read some books from countries which I’ve already covered. Most notable here is Alix Christie’s Gutenberg’s Apprentice. Even if you’re only vaguely interested in books, how to produce them and the history behind it, this one is for you. And if not, it’s still a great read as a piece of historical fiction.

98 Antigua and Barbuda: Jamaica Kincaid – The Autobiography of My Mother

Great to be back in the Caribbean. And also great to listen to another audiobook read by Robin Miles (the first one was my choice for Somalia). I found the story engrossing and at times enchanting. The main character was very sensual, at times quite saucy, and her descriptions of the physical world made her surroundings really come to life. The bitter-sweet denouement made for a perfect ending.

Firstly, many thanks to my Arabic teacher Zuzka for recommending me the author. I’m just afraid I chose the wrong book here. It sounded intriguing to read a book of letters from war-torn Lebanon to different people, to the Country or to the War. But I couldn’t connect with the writer of those letters, the addressees or any other character, for that matter. I think I’ll try one of the non-fiction/autobiographical books by the author. They seem to be quite different.

100 Macedonia: Lidija Dimkovska – Do Not Awaken Them With Hammers

And it was time for some poetry. What I enjoyed most about the poems was the author’s sense of humor, which was at times quite cynical. It left me with the reassuring feeling that I’m not the only one who finds modern life a bit confusing every now and then.

Wroclaw is full of big and small surprises, and the smallest, but one of the best in my travel book, are the gnome 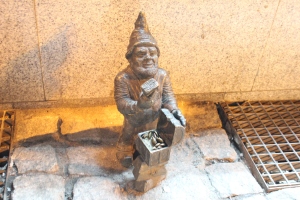 s. There are several hundred of them all over the place, but most are hidden in plain sight in the Old Town.

They seem to be a mix of political statement and advertisement, a bit tacky at times, but mostly great fun to look out for. 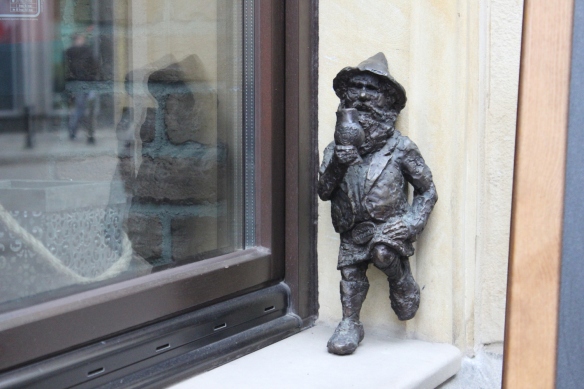 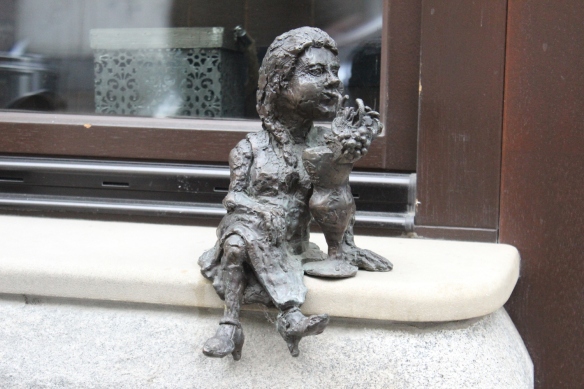 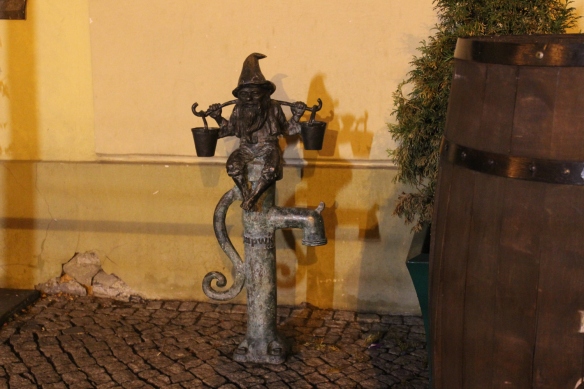 It’s a slightly odd picture of a Zonotrichia capensis, but unfortunately I didn’t have much time. When we were in Tierra del Fuego, we only spent a few minutes at a lovely lake bordering Argentina and Chile in the National Park near Ushuaia. So I’m very glad I saw at least the sparrow’s back. 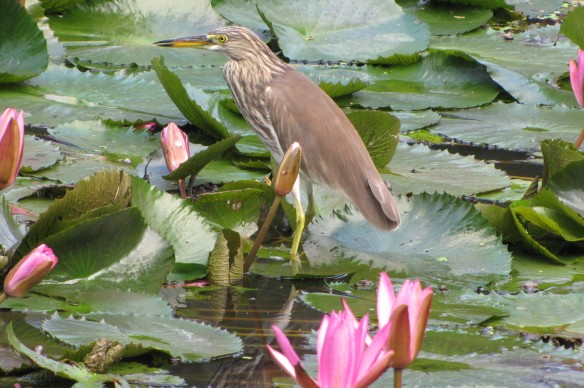 We are entering the murky waters of Khao Lak in Thailand and the even murkier ones of heron taxonomy. This is a member of the Ardeola species, but apparently it is almost impossible to distuguish Ardeola speciosa (Javan pond heron) from Ardeola bacchus (Chinese pond heron) outside the breeding season. Their non-breeding ranges overlap, so take your pick.

I’m not sure this book has actually been translated into English – if not, it’s a great loss. ‘The Blue Rock Thrush’ is, however, not the main feature of the book. This place is taken by an elderly French lady, her ornithologist husband, and a young man who turns out to be a refugee from somewhere in North Africa. I greatly enjoyed reading about how their lives intertwined. The story not only touches on loneliness in old age, hypocrisy and family matters, but there’s also a lot about how our identities are being shaped and changed.

96 US Virgin Islands: Tiphanie Yanique – Land of Love and Drowning

Firstly, many thanks to my parents for this remarkable Christmas present. In some ways, this book reminded me of Isabel Allende’s ‘The House of Spirits’, in particular in that it tells the story of three generations of a family who have to deal with economical and political upheaval. On top of that, ghost and the supernatural featured heavily too. Nevertheless, it has its very own character. The parts of the story where Kittsian figures are being confronted with racism from US-Americans were those I found especially strong.

This was another short but intriguing book about a small place in the Caribbean. Family issues, jealousy, corruption and much more were touched upon. I particularly liked how the author managed to form three-dimensional characters within a few sentences.

I found all three books worth reading. If you have a recommendation for a country or territory which I haven’t covered yet, please say so in the comments, especially for any Pacific Nations and the Gulf States. Thanks.

This group of Aythya fuligula was a bit of a surprise find, as this pool was quite shallow. Tufties like to feed diving.

What’s in a name? In German, this species is called ‘Reiherente’ which means ‘heron duck’. Someone must have had one beer too many.