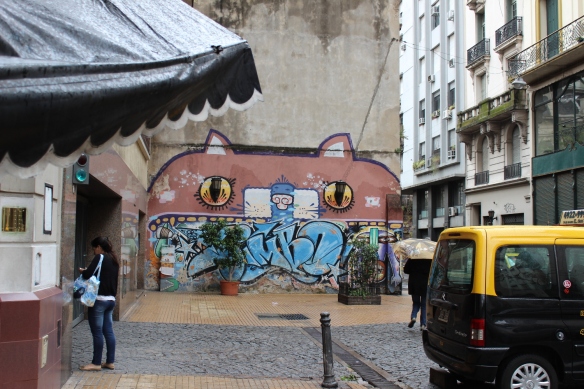 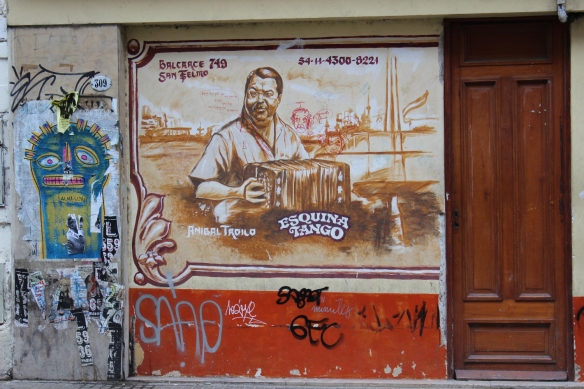 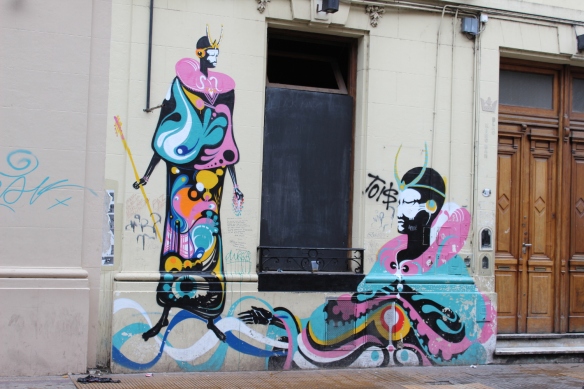 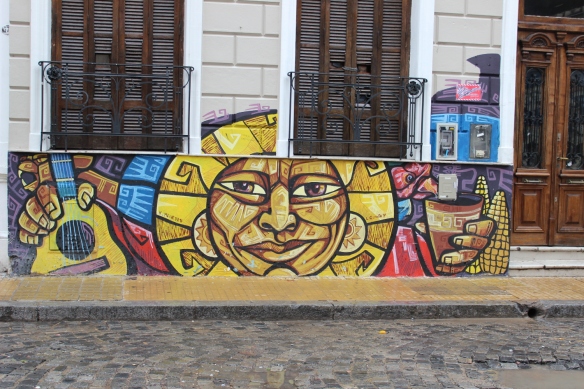 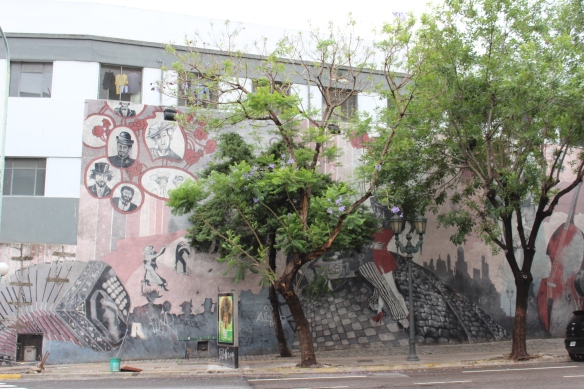 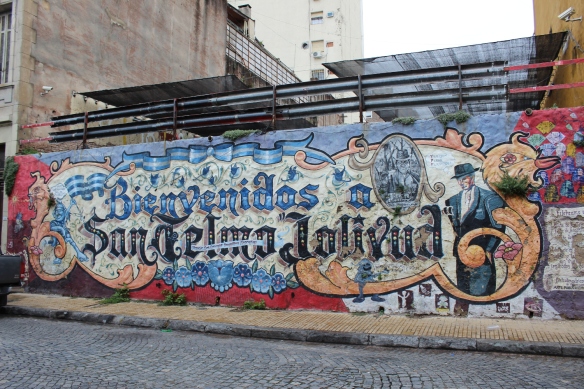 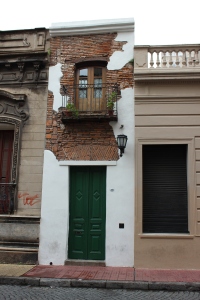 Today’s stroll took us to the area San Telmo. It’s a bit touristy along a particular cobbled street, Defensa, which also had a kind of flea market going on. Since we aren’t the market kind of people, our detours via the parallel side roads offered all kinds of surprises, such as Casa Minima. 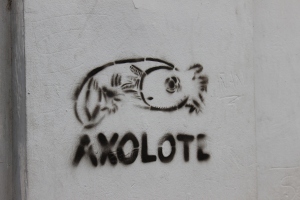 There were also loads of murals. The Axolotl has its appearance here, the others get their own blog post. 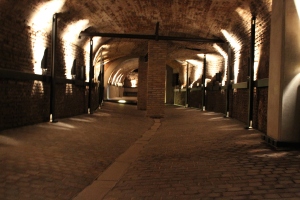 Our main target of the day was El Zanjon. It’s an old brick building, reconstructed, and it’s got tunnels. The quirky bit is, the tunnels follow subterranean rivers which flow into each other and then into the Rio de la Plata. 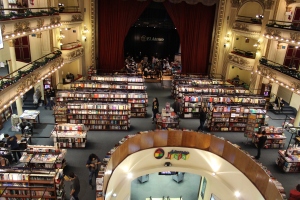 After so much wandering we deserved a break and enjoyed the local version of hot chocolate called submarino. The place, which looks like a bookshop set in a theatre, is a bookshop in a theatre, and it’s beautiful. Very atmospheric to have one’s snack on stage with books as audience! 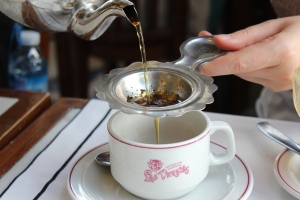 The breakfast we enjoyed at Las Violetas was enormous in quantity, but with sweetened coffee. My tea, however, was very good. 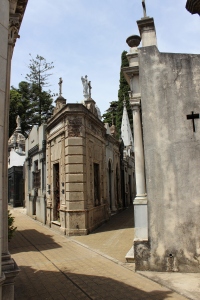 The Recoleta cemetary is a popular tourist destination. Many graves are also still visited regularly by family and friends. Evita Peron’s burial place is there too, but we didn’t look for it. Just loved strolling around for a couple of hours. 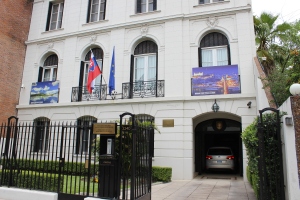 Along the way to the museums of fine art and Latin American art we stumbled across this familiar sight – the castle and St Martin from Bratilava. 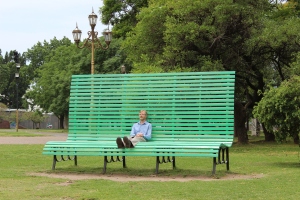 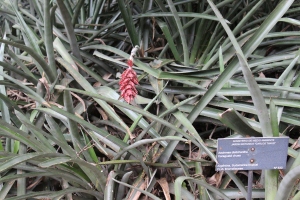 The Botanical Garden was home to only one species of bromeliaceae, or at least we found only one. 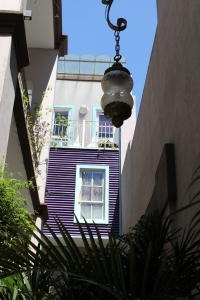 Our hotel is really fab. 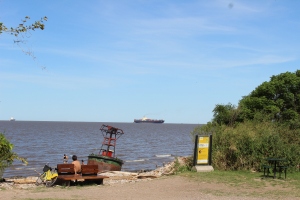 The Rio de la Plata is just too huge for a river. 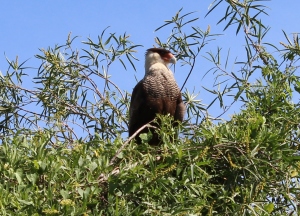 The Southern Crested Caracara was a highlight. 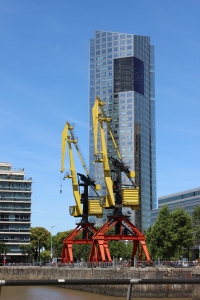 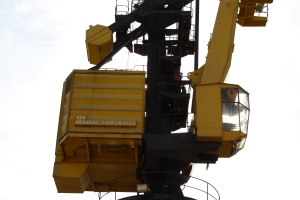 Those are remnants of the GDR.

Our itinerary – courtesy of www.hurtigruten.com – for the coming trip. The boat should leave from Ushuaia though. We’ll find out! 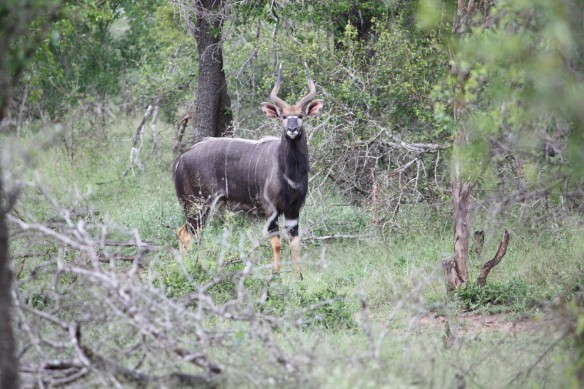 Met him in Swaziland.

Expect a lot less forest on my next trip.

… or at least readier. We ‘ve got a week or so left, so no hurries.

Mrs Black has also figured out that there’s new housing to be had:

Her human is still doing classifications for the Zooniverse. This time, it’s (what else could it be?) Penguin Watch. One of my favourite pictures here: 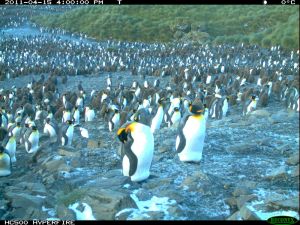 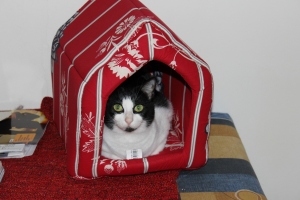 Floh is already practising for her holiday in the cat hotel – http://www.jurrasicpark.sk/foto.html.

Meanwhile, her humans are getting the final bits and bobs sorted, like seasickness medicine for the Drake passage.