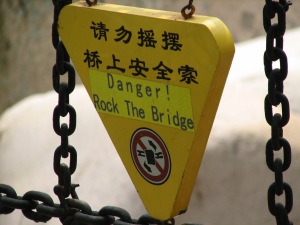 errors are volitional and are the portals of discovery 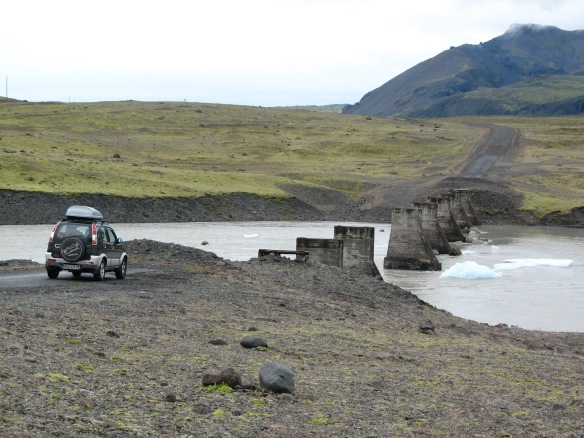 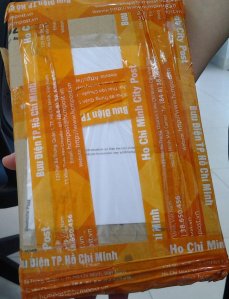 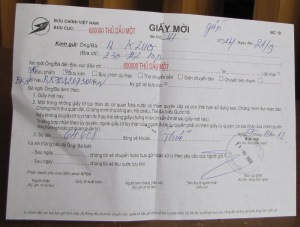 hat my parents thought about their daughter’s approaching B-Day. So, mid-September a little packet took off from Germany, courtesy of Amazon. The big travel East had begun.

About three weeks later I received a letter (in Vietnamese, and with many stamps) from the main post office in Ho Chi Minh City. My Vietnamese colleague told me: ‘Packet for you! Just pick it up from the post office.’

At the post office in the little town where I live the clerk looked at me as if I deserved some very special care.

‘The packet is not here. It’s in HCMC. You have to go there.’

As I didn’t have time for the trip I asked a colleague to pick it up. Colleague went, it took some time to find the post office on the outskirts of HCMC. Then, I got a call. I simplify the ensuing mix of English, Vietnamese, and curses in proto-German. 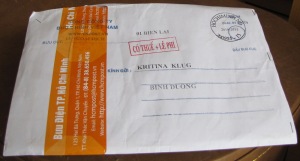 ‘They won’t give me your packet.’

‘They want a letter from our employer. You have to apply for the packet to be sent to the company.’

Dutifully, I asked HR for said letter. Two days and a few more stamps later, it went off to HCMC.

Finally, today, 51 days and at least twenty stamps on different letters and receipts later, I got my present.

NB: The address on the envelope shows a typical feature of Vietnamese learners of English – omitting /s/ or /z/ in the middle or at the end of a word, now also in writing.